Santa Maria La Nave is a petite reality on Mount Etna which is exploring and embracing the practice of extreme viticulture. They produce exclusively cru wines dealing only with native grapes farmed on prohibitive terroirs. They own two vineyards, one in the south-east area of the volcano and the other in the northwest area. The one in the south-east area is located in Contrada Carpene lying on the side of an extinct crater which is called Mount Ilice. This is the first vineyard we visited that morning and it’s where we met also Don Alfio who is the gentleman that has owned and farmed this land for the previous half of a century. 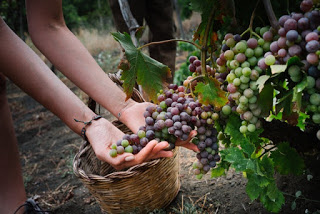 The palmento, older than Don Alfio, is still there and Sonia is investing in refurbishing it into a sort of little museum, since the Italian law does not allow anymore its practical use for winemaking. Shall the reader be curious to learn more about the modern winemaking reality arising from the Palmento’s tradition, I address her/him to the excellent book “Palmento: A Sicilian Wine Odyssey” by Robert Camuto. 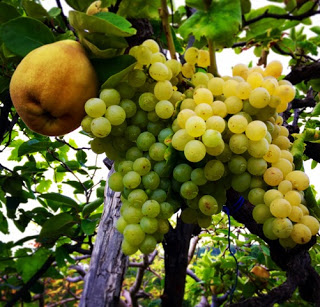 Outside, the slope of the vineyard is striking, with altitudes rapidly roaming from 720 to 810 mt. The soil is characterised by pure black volcanic sands and ashes (about 1000 years old). It’s nealy impossible for us to climb up without having our boots sunk in the soft soil. It’s like walking in dry quicksand. I can’t seriously imagine what sort of strenous efforts and stubborn attitude are required to work this piece of land. One may also wonder how erosion has not washed this hill down in a day or two. Instead it’s exactly the opposite. Everything remains stable since centuries. Pre-phylloxera specimens of Nerello Mascalese and Nerello Cappuccio and other local varieties (Carricante, Catarrato, Minella, Moscatella dell’Etna, Insolia) testify the wealth of Etna’s viticulture as its in his original splendor. “We are doing our best to help this phoenix shining back from the ashes again”, says Sonia caressing a baby bunch of Nerello grapes. Veraison is barely started here. Vines on Mount Etna have such a longer cycle than the ones on Sicily lowlands. No doubts this is a main cause behind the finesse and vibrancy of Etna’s wines.