Frank Cornelissen was in town showing off his new wines. It’s a series of single-vineyard wines from his 25 hectares and 19 plots on Mount Etna. ‘It’s the focus of my work,’ he says, ‘but less than 10% of my production.’ He’s held off making these wines before, because his winemaking wasn’t good enough to show all the nuances. ‘It took me 10 years to vinify in a better way to make this quality,’ says Frank. ‘I still have some fine tuning to do, but this will take time and money. The last 5-10% of quality costs as much as the previous 90%.’ 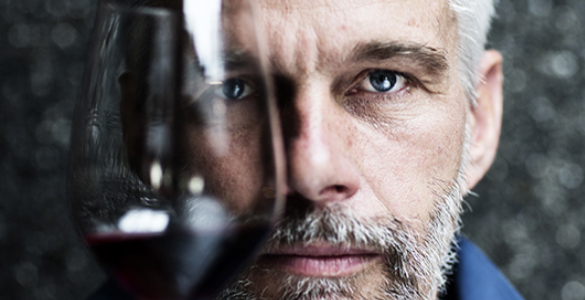 Frank uses epoxy-lined amphorae to make these wines, and his goal is to produce wines that allow us to taste the vineyard. He’s convinced that the future of Etna is parcellation. ‘It is a booming area to the professionals,’ he says, ‘but for the consumer it is not yet known. This will come.’

Above all, Frank is a wine geek. ‘I started making wine because of a passion for wine. I like drinking wine and it is fascinating making these single vineyard wines, even though commercially it is a headache.’

In terms of winemaking, he rarely uses stems. ‘I’m not a fan of stems: the tannins of the stems and the skins rarely fuse.’ He’s been doing some experiments with carbonic maceration. But most of the wines are made in the normal red wine way. ‘I like ripe fruit and I take a classical approach,’ he explains. ‘I destem and do long extractions, protecting the wine from oxygen.’

All of the wines are made without any sulphite additions, but over time he has softened his approach. ‘I drink wine with sulfites,’ says Frank. ‘I’m not religious about it. This year, if I’d faced the same difficulties as 2003, 2010 or 2015, I’d use sulfites.’ He says he is looking for wines that are microbiologically stable, so he will filter with wines he thinks might give him problems later.

‘When I started I made wine in an unorthodox way, but if the wild side of the wine overwhelms the territory, it’s sad,’ he explains.

In an interesting twist, Frank has taken on a sparring partner: an enologist who is now working with him. ‘After 17 years I have come to 90% of my vision and capacity as a winemaker. I need a technical sparring partner.’ So decided to seek help ‘where the serious stuff is done: Bordeaux.’ He’s now working with Guillaume Thienpoint, son of Alexandre of Vieux Châteaux Certan in Pomerol. ‘He’s an incredibly good taster, and he’s good at microbiology.’ To take on a Bordeaux consultant at this stage shows the humility of Frank, and how open he is to learn, improve and change. ‘If you want to improve you have to question what you are doing.’

It’s interesting, because Cornelissen has always been considered to be a natural winemaker, yet he doesn’t like the term. ‘I love the idea and the concept, but if you analyse it there is no natural wine,’ he says. ‘It is entirely related to culture. You won’t find enough grapes in a forest even to fill a demijohn!’

He thinks that to make wine, you need an aesthetic model. ‘What does my wine mean?’ he asks. ‘I like wines that are full bodied, rich and profound, not just a fragrant wine. I also like single vineyard wines.’ In warm vintages, he can struggle with high level of ripeness, whereas those known for their earlier picking can do better in those years.

It’s always enlightening talking with Frank, and it was lovely to taste through these wines, each with their individual personalities. Nerello Mascalese on volcanic grit, with no chemicals, additives of flavour-active vessels. An expression of place, but a personal interpretation of place, too.